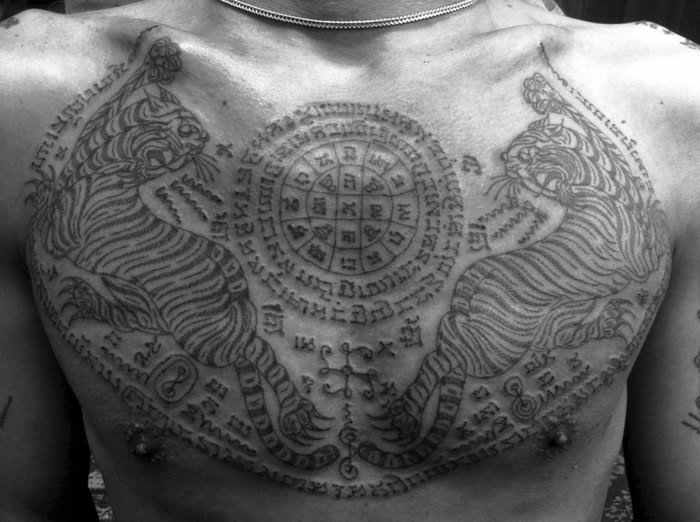 Cambodian Tattoos: Why Getting One Could Save Your Life.

Cambodian Tattoos… Not just your ‘average joe’ in the tattoo world, these intricate pieces of artwork can come with an extra spiritual kick that some believe could save your life one day.

Today, we are going to give you all the ingredients you need to understand the wizardry behind these beautiful pieces of artwork…

Cambodian Tattoos: Why Getting One Could Save Your Life.

The Cambodian tattoo art of ‘Sak Yant’ is a artistic practise that is steeped deep in Asian tradition. These tattoos are said to be a defence mechanism against bad luck and have been providing locals with protection for years and years, and years.

It’s not just about avoiding bad luck. These Cambodian tattoos can be utilised for a variety of positive catalysts as well; such as attracting love, being successful in business and generally bringing happiness to life.

The Cambodian tattoo practise of Sak Yant has been passed on from generation to generation. It tended to be monks who would be pioneering the inking. Sorting those in need with a artistic shield of ‘armor’ that would both protect and serve.

However, just as all creativeness and positive movements, Sak Yant suffered a tough blow during the restrictive Khmer Rouge regime. Pol Pot and his army of buffoons attempted to strangle the livelihood of the nation from 1975 to 1979. And in doing so almost wiped out this magical tattoo tradition.

Many soldiers would coat themselves head to toes with Sak Yant tattoos in an attempt to avoid death, which found the majority of them anyway. Thus, the utility of these Cambodian tattoos was thrust into the limelight, and many believed it all to be a bit of fake hocus pocus.

Back with a vengeance…

Luckily, Sak Yant is still working it’s wizardry today, and is well on it’s way to becoming a fashion trend of the West. Thanks to the oh so lucky few that lived through the Khmer Rouge to tell the tattoo tale, and with the help of Cambodia’s favourite celebrity, Angelina Jolie…

Sak Yant tattoos are carved into the skin using bamboo needles. They typically are a combination of Buddhist and Hindu sacred images, Pali script, Buddhist Sutras, sacred geometry, and other unique symbols and designs.

The secret recipe of the ink used for the tattoo is only truly known by the individual monk, who makes it himself. Though it is believed to contain a combination of herbs, ashes, Chinese charcoal, palm oil, and snake venom!

The power is in the artist’s hands…

Intriguingly, these Cambodian tattoos are selected for the individual by the artist. They bring with them specific benefits depending on what the individual is looking for; from dodging bullets and bird poo, to captivating a love interest and beyond.

In order to maximise and maintain the ‘magic’ of these tattoos, a number of righteous rituals must be abided by (by both the artist & the wearer)….

This can include avoiding particular foods, sexual acts (YIKES!), and alcohol. It is believed that if these rules are ignored, the tattoo will lose its power and could even turn on its owner.

Icing on the ink cake…

After the tattoo is completed, it must be blessed at several pagodas.

As with all tattoos, there is a risk attached. However, typically the traditional Sak Yant tattoo is considered to be higher risk than most. This is because the bamboo needle that is used tends to shared across multiple tattoos, and therefore there is a danger of cross contamination and catching something nasty.

Always make sure that the needle has been thoroughly disinfected, either by yourself or the artist.

If the risk is all too much for you, but you still want to get your very own Sak Yant artwork; it is possible to go to an official tattoo parlour and then get a monk to bless it afterwards.

Cambodian Tattoos: How Much Does A Sank Yank Tattoo Cost?

Surprisingly, even with all the magical benefits that come with these Cambodian tattoos, they happen to be one of the cheapest inking sessions around.

You’ll be expected to pay for your artwork not with money, but with offerings. Things such as flowers, incense and precious possessions can be traded for the tattoo. Of course, it’s always courteous to provide the artist with some financial reward (a tip for their time!).

Cambodian Tattoos: Face To Face One Of The Most Famous Artists

Sak Yant are popular all across South East Asia. In Thailand it can still be very frowned upon for a tourist to have a Sak Yant tattoo, as for the locals they are deeply rooted in their ancient culture and tradition. Cambodia tends to be much more relaxed. Result!

Anyways, if you are in Bangkok and thinking about inking, this is the big boss of the Sak Yant scene…

If this piece has got you seriously thinking about some magical inking… Check out these other pieces on Cambodian tattoos! We only recommend bloggers we read often and love:

Startups in Cambodia – How Did We Do? 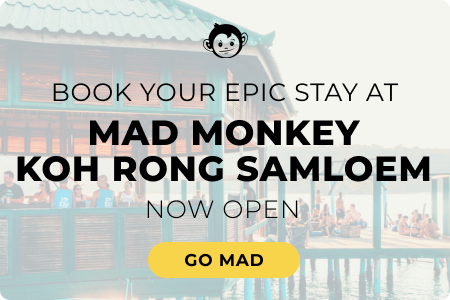