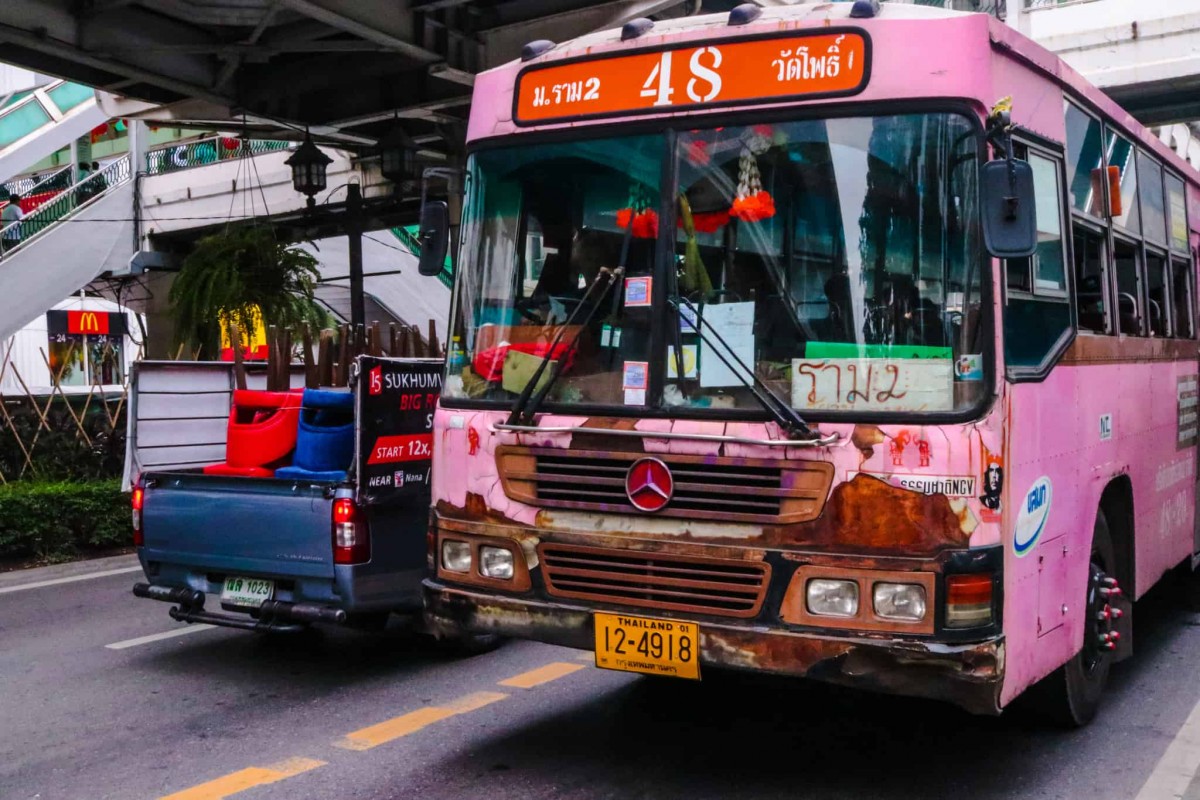 How To Get Around Bangkok

Knowing how to travel around a city as hassle-free as possible is one surefire way to ensure you make the most out of your time there. With so many modes of transportation, however, do you know how to get around Bangkok? Here, the best Bangkok tips for getting around the city. You will be travelling in the capital like a local in no time!

How to get around Bangkok: Take the trains

The BTS Skytrain and MRT Subway are two of the cheapest ways to get around town. Not only are they affordable, but they ensure that you pass over Bangkok’s insufferable traffic. They are also air-conditioned, so taking these forms of publication ensures you have a cool journey, no matter where it is you are going.

The BTS Skytrain opened on December 5, 1999. Since its opening, many stations continue to pop up and expand where it is visitors can go. It consists of both the Sukhumvit and Silom Line and these two connect at the Siam station. The Sukhumvit Line is where visitors will also find the Airport Rail Link. Passengers heading to the Suvarnabhumi Airport can avoid traffic and take this line all the way there.

A ticket for the Skytrain ranges from ฿15-52 (about $.45-1.65). It is ฿150 (about $4.50) for an unlimited ticket for one day, as well. This ticket is more useful for those who expect to take the train several times throughout a day in Bangkok. The Skytrain is open from 6 a.m. until midnight.

The MRT Subway is the underground version of the BTS Skytrain. We would argue that it does not reach as many of memorable locations around the city. It is as clean and affordable as the Skytrain, however. It also connects to the BTS at three separate lines: Sala Daeng, Mochit, and Asok. The MRT itself consists of two lines: the Purple and Blue Line.

Prices for the MRT subway range from ฿15-40 (about $.48-1.27). It is also open daily from 6 a.m. until midnight. Some of the top destinations that can be reached by taking the MRT Subway include Chinatown, the Khlong Toei Wet Market, and the Chatuchak Weekend Market.

How to get around Bangkok: Always get a metered taxi

By law, it is illegal for a taxi driver not to use a meter. Many drivers will suggest a fixed price when you flag them down. They will likely claim it is because there is traffic or your destination is quite far. If this is ever the case, simply thank the driver and find a new taxi. It may take longer but is worth it in the end not to be scammed. A metered taxi should start at ฿35 (about $1.11). Metered taxis from the airport have an additional ฿50 surcharge, as well.

How to get around Bangkok: Avoid travelling by car during rush-hour

Bangkok is equipped with some of the worst traffic in the world. In 2016, Bangkok drivers spent nearly 64 hours in traffic jams. The country was officially announced as the 12th most congested one in the world. With that being said, try to avoid travelling rush-hour, though it may feel like every hour is rush-hour at some point during your travels.

How to get around Bangkok: Split a taxi when possible

Regular taxis hold up to four people. Reckless drivers will fit even more people into their car. The more people you fit into a car, the cheaper the taxi will be. Taxis are a budget-friendly form of transportation when shared amongst a few people. Taxis are not incredibly affordable ways to get around town if you are travelling through Bangkok solo, however.

How to get around Bangkok: Hop on a motorbike taxi if you are running late

One of the most exhilarating (though not exactly safe) ways to get around the city is on the back of a motorbike taxi. These drivers are recognizable by the bright orange vests they wear. They are normally huddled around a handful of bikes. All you have to do is approach them and tell them where you are going.

In some cases, there are set fares to certain places. If you take a motorbike from the National Stadium BTS Skytrain station to Mad Monkey Hostel, for example, it is ฿150 (about $4.80). Other times, the prices fluctuate as a driver knows you may not already know what the fixed rate is. Though this is sometimes a more expensive way to manoeuvre the city, you will definitely beat the traffic. The drivers are pros at weaving through any taxis, buses, and cars that congest the streets.

How to get around Bangkok: Take a tuk-tuk … but only once

It is a rite of passage for all travellers to hop in the back of a tuk-tuk. This should happen at least once during your journey through Thailand, but no other times. Tuk-tuks are normally more expensive than taxis. This is ironic, as tuk-tuk literally translates to “cheap, cheap,” in English. This is because they are allowed to set fixed prices. They are also uncomfortable and not necessarily the safest form of transportation. Do it once for the experience then call it a day.

How to get around Bangkok: Get around the city via boat

The capital of Thailand used to be referred to as the Venice of the East, and for good reason. During the 19th century, the city was a crisscrossed pattern of waterways before the need for more urban décor replaced and covered up these canals. Today, the Chao Phraya River continues to run through the heart of the city and is teeming with boats ready to take you to your next destination. There are also plenty of khlongs (canals) with piers at some of the most sought-after destinations in town. Some destinations that can be reached via waterway include Wat Pho, Wat Arun, Asiatique, and even Mad Monkey Hostel Bangkok!

The Chao Phraya River Express Boat is the main form of transportation on the river. There are four different types of these boats, and they are differentiated by colour. The orange boat is in operation every day of the week, and there is a set fee of ฿15 (about $.45) no matter where you are going. Those of you who do opt to take this form of transportation must be wary, as some boat drivers hardly give passengers enough time to hop on and off the vessel before heading to the next pier!

How to get around Bangkok: If you are willing to pay more, take the highway

Throughout the city, there are highways and expressways you can use to get to your final destination a bit faster. That being said, these come with a small fee. The cost of taking a highway or expressway can range anywhere from ฿20-70 (about $.64-2.22). If you do not have the time but do have the baht, be sure to tell your driver to take the highway when possible.

How to get around Bangkok: Have a sim card and use GPS or a map

Not all taxi drivers have your best interests in mind. If you come across as a clueless tourist trying to get to a destination you do not know the location of, a taxi driver just may take advantage of that. To avoid being scammed or have a driver go in circles intentionally, have a sim card or some type of map handy so that you can guide them. Also, do not fall asleep in the back of a taxi! You never know where you will end up.

Nancy Chandler’s Maps of Thailand are another extremely helpful resource for those exploring the city of Bangkok and beyond. These maps were hand-drawn for tourists and expats hoping to see the capital in-depth. They are chock full of insider tips to getting around the city as well as lesser-known sights sprinkled throughout the capital. The hardcopy and digital version both come with a directory that is over 100 pages in length to help you start your journey.

How to get around Bangkok: Know these Thai phrases to help you get around town

Knowing a few Thai phrases will help you be able to give a driver directions. Below are some of the most useful phrases we have found that will help you get to your final destination.

How to get around Bangkok: Download a few helpful apps

There are a handful of apps you should consider downloading before venturing to Bangkok. Some are specific to a certain public form of transportation while others will help you get a taxi while one seems impossible to flag down.

If you read this article but want to know even more about how to travel in the capital like a local, then be sure to check out the following helpful articles. We only recommend blogs and websites that we read, as well. Enjoy!