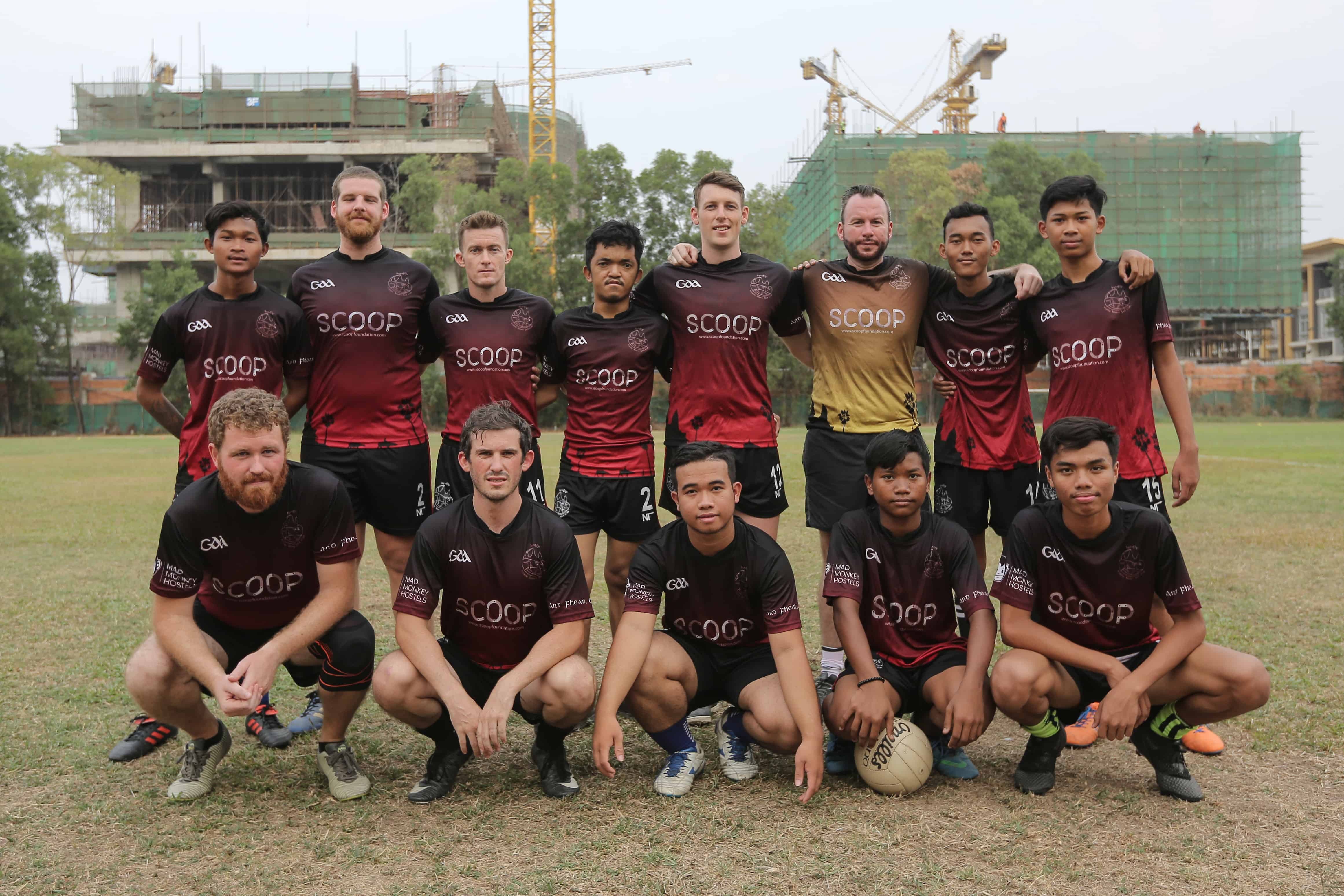 Interwoven into almost every game of sport is the importance of teamwork. Finding a community is always easier when doing something as a team, especially those with a common goal — to win. But sport isn’t all about winning or losing. April 6, 2019, marks the annual United Nations International Day of Sport for Development and Peace. Regardless of the holiday, Mad Monkey Hostels is the proud sponsor of several sports teams around the globe. Keep reading to find out more about how a simple game can bring people together!

The United Nations International Day of Sport for Development and Peace 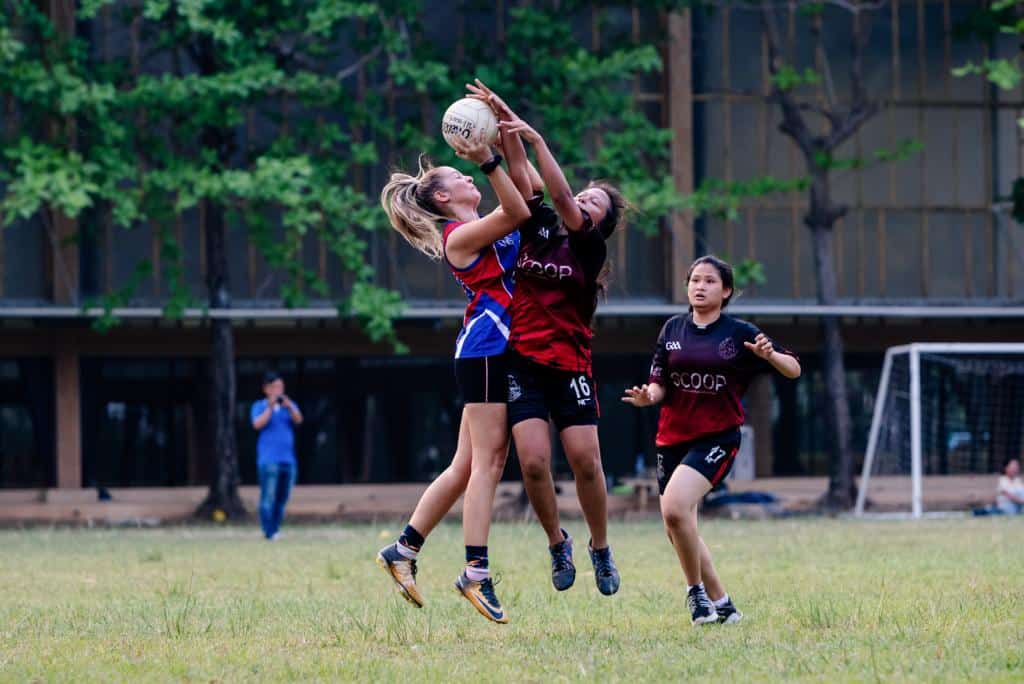 Mad Monkey Phnom Penh, the original Mad Monkey, recognizes the power that sport has to promote peace and create comradery amongst players, just as the UN did by creating the global observance in the first place. Since then, the hostel has tried to support local teams to the best of their ability so that more players can join and establish a sense of community.

It all started in 2013 after a friendly pick-up game between Martin McGuiness, a group of Khmers, and some expats who were working at the Australian Embassy at the time. Soon afterward, Riel Phnom Penh Football Club was born. He decided to start an all men’s which officially began to make a name for itself in 2015 with the help of Jamie Roy. The casual kickarounds turned into serious matches, and their accomplishments since inception have been impressive, to say the least. 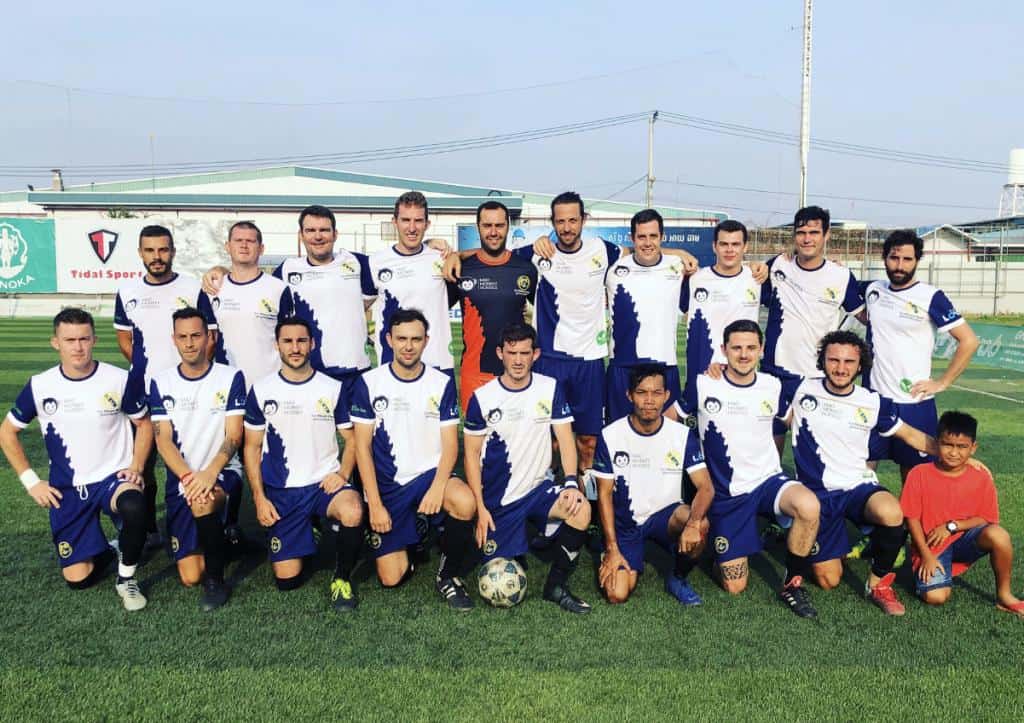 In 2018, for example, two of their teams were entered into the Gentleman’s Tournament — both reached the semi-final stage against strong opposition who had been established for much longer. The accomplishments continued to arise, and Roy is even more hopeful for 2019.

“This season we are looking to do even better,” Roy said.

The all men’s team was soon followed by an all women’s team with the help of Gemma McGuiness, Martin’s wife. In April 2018, the Riel Phnom Penh Srey had their first training session. At the time, only five women joined the brand spanking new session — today, over 40 players are joining training sessions up to twice a week. And while football is the name of the game, these athletic get-togethers are so much more than friendlies and tournaments. 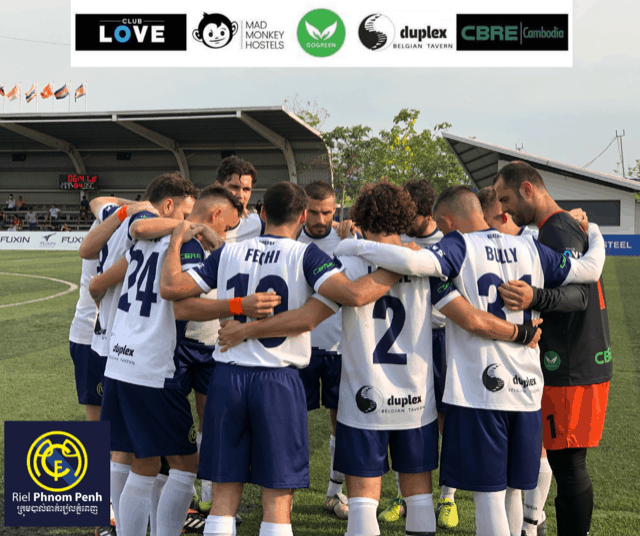 “[I enjoy] the off the fields events and gatherings,” Roy said. “It’s great to be part of a team who enjoy spending time with each other away from the field, and, of course, having the RPP family there for support at any time.”

In addition to the team supporting one another, the practices, games, and tournaments wouldn’t be possible without the teams’ sponsors.

What Role the Sponsors Play

The sponsors play an incremental role off the pitch — they help support the teams to be able to enter leagues, tournaments, purchase necessary equipment, host events, give awards and much more. In addition, the sponsors make it possible for locals to join the community without putting them into any financial strain.

“We decided as a club that our Khmer players should not have to pay a single dollar when they train or play,” Roy said. “We couldn’t achieve this without the generous support of our sponsors.” 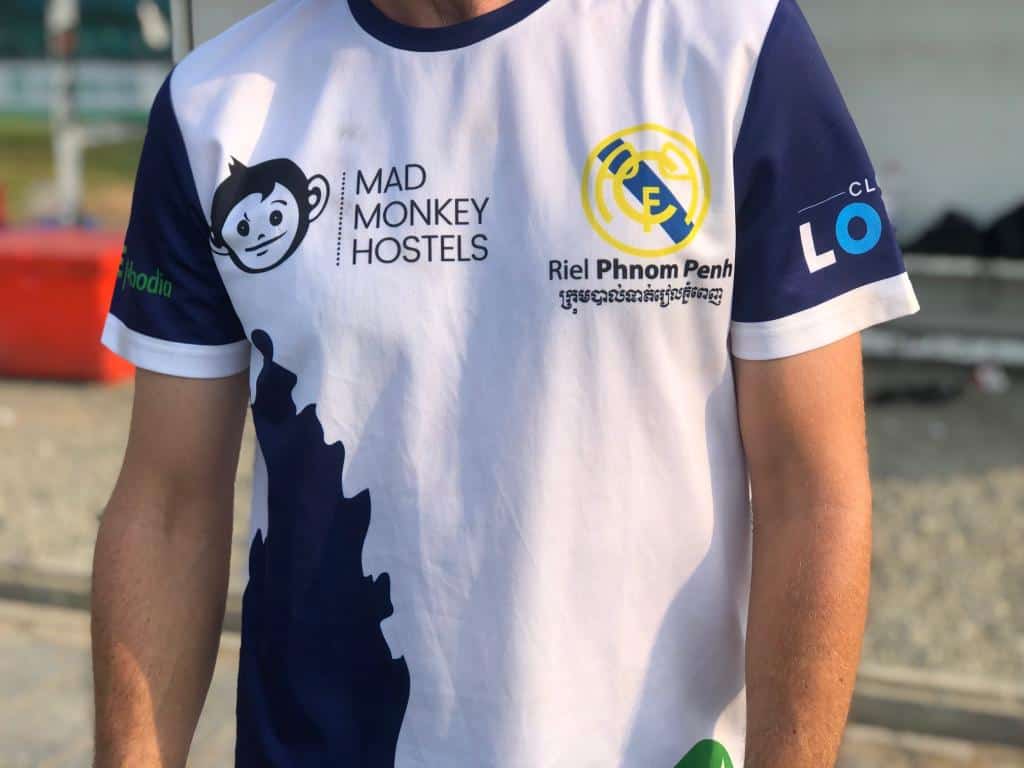 Khmers, expats, backpackers, digital nomads: all are welcome to join either of the football teams. If not for the sake of getting in a good workout, the practices and games are ideal places for meeting people in Phnom Penh.

“Get down and give it a go,” Roy said. “We’re a friendly bunch of guys and always happy to welcome new players. We don’t pride ourselves on being the friendliest team in Phnom Penh for nothing!”

If football is not your scene, there is another alternative to team sport in Phnom Penh and Siem Reap — we are talking about the Cairde Khmer GAA Club Cambodia. Players get a taste of Ireland in Kampuchea (Cambodia) as they take to the pitch, made up of a hodgepodge of expats hailing from the Emerald Isle, some international expats, and Khmers. 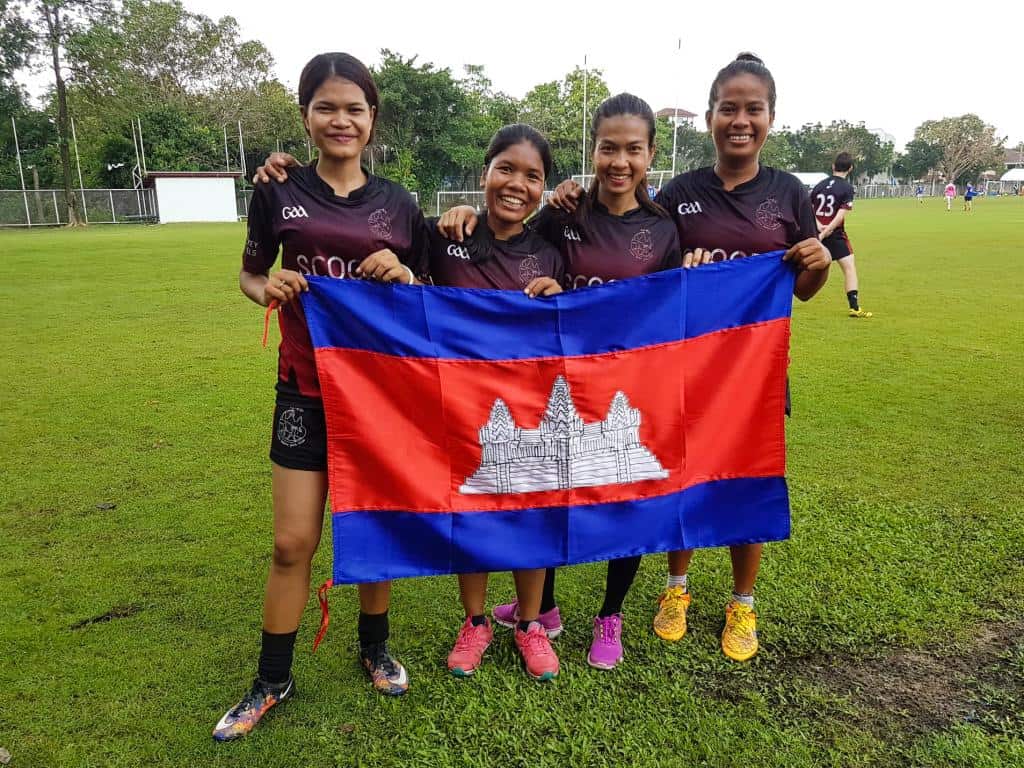 “I just love playing Gaelic football and miss it terribly,” said Conor Wall, a freelance photographer who hails from Cork. “Also since the club was founded, it is very rewarding to see other nationalities enjoying this Irish national sport and forming new friendships with Irish expats living in Cambodia. It truly warms my heart.” 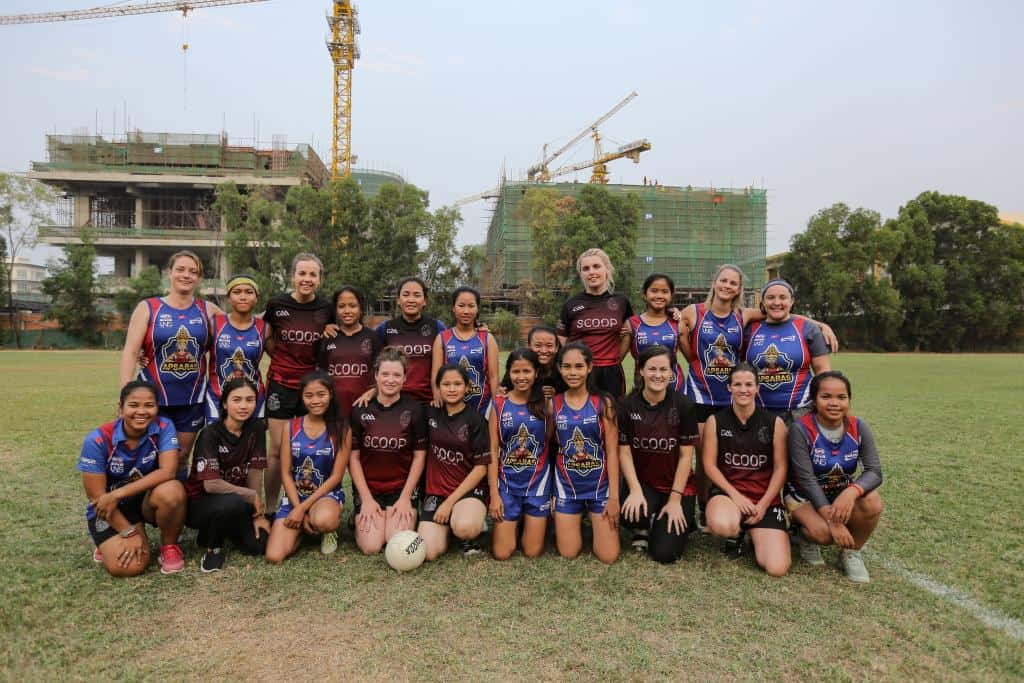 How it all Began

The team started in October 2017 and offers Gaelic football, hurling, and camogie in both Phnom Penh and Siem Reap. Each year, the team plays about four inter-club games, two international rules games against the Cambodian Eagles AFL team, and have two international tournaments under their belts, as well.

If you’re wondering what Gaelic football is and if stepping out onto the field with zero knowledge of the sport sounds intimidating, fret not. Many of the players on the team are beginners who show up without knowing a thing about this sport. 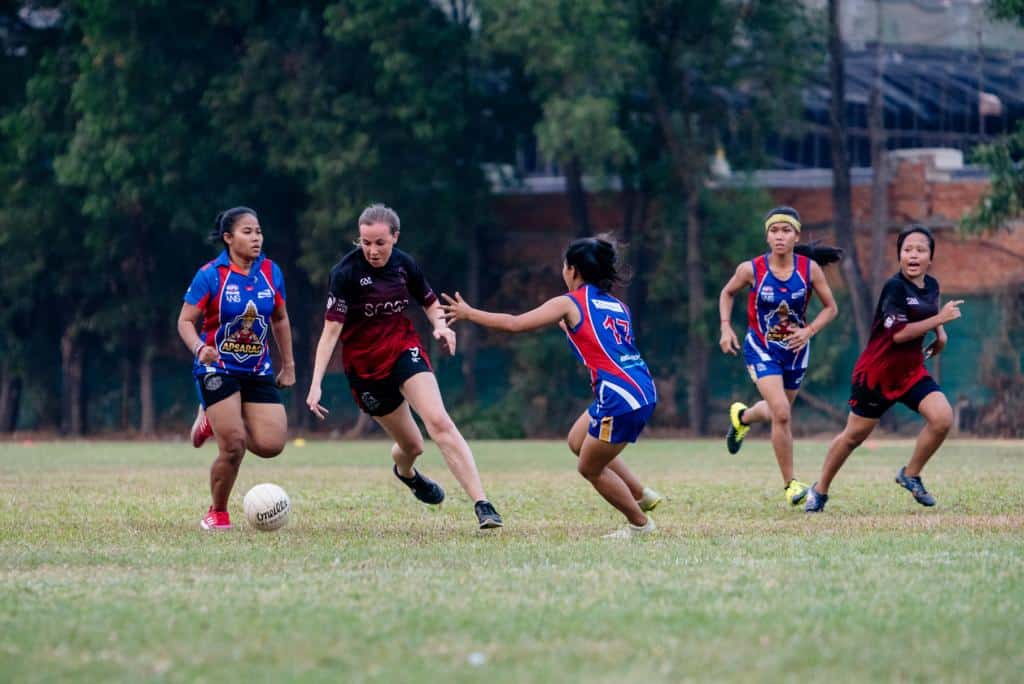 “[I] first heard of the GAA from a friend,” said Cheth Kanika, one of the female players on the team. “I didn’t really know what to expect not having heard of Gaelic football before, yet [alone] play.”

Kanika caught onto the sport quickly, however, and enjoys combining the different techniques and skills required to be successful on the field. 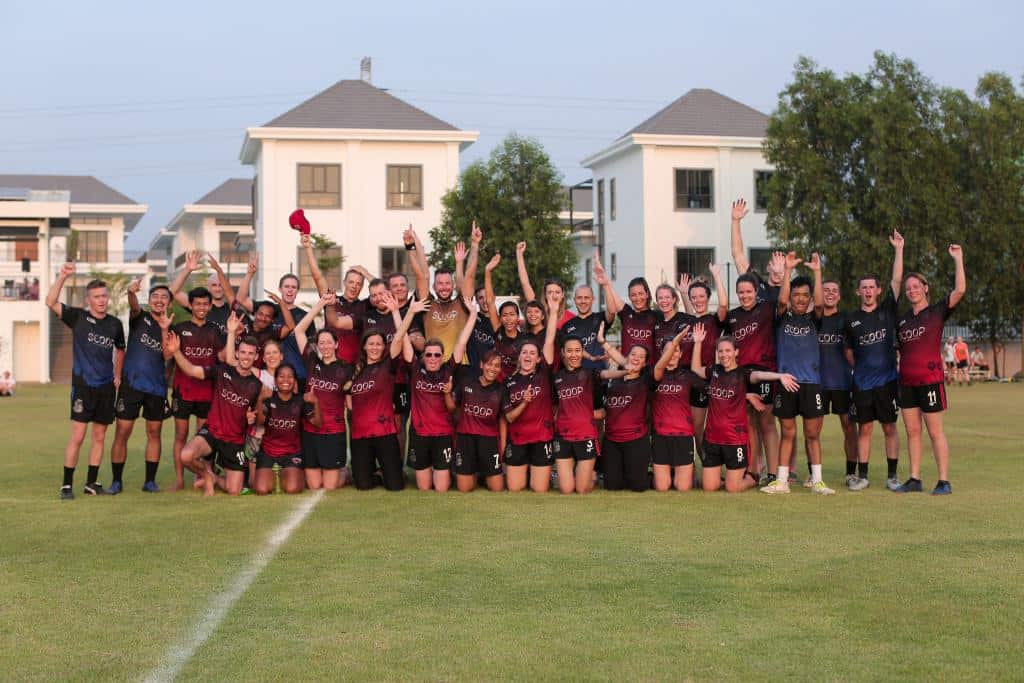 “With what started as a mission to keep healthy and fit has totally got me hooked,” Kanika said. “It’s exciting to have such a healthy balance of fun, competitiveness, and team spirit; it’s a great sport and love the community it has brought together with it.” 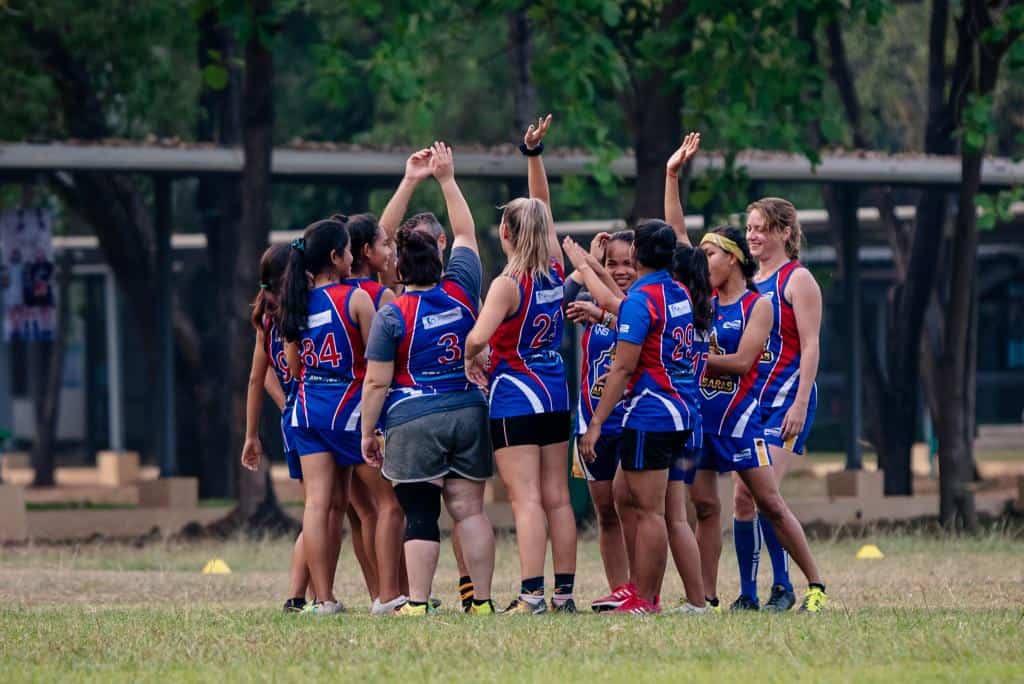 The training sessions, which happen once to twice a week, are structured to accommodate players like Kanika who are learning the skills for the first time.

“Us Irish are friendly,” Wall joked. “Fear not!”

Giving Back to the Community

In addition to welcoming all who want to join, both Cairde Khmer GAA Club Cambodia and the Riel Phnom Penh Football Club are active in a number of community efforts that improve life in the cities. The teams have partnered with GoGreen to take part in city cleanups, have been a driving force behind clothing collections, and have even organized charity half-marathons. 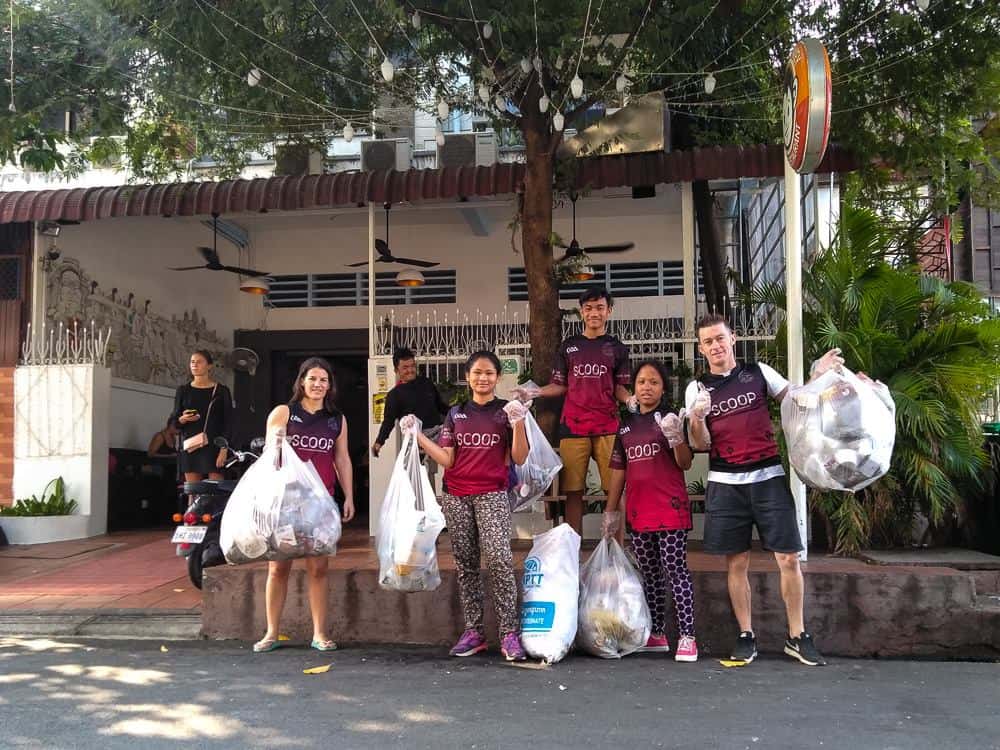 The teams most recent charity venture has been to raise the $330 needed to build a water well with the help of Mad Monkey. The hostel is one of many donors to the Cambodian Buddhism Association for Vulnerable Children (CBAVC) in the Siem Reap province. Mad Monkey sponsors the Clean Water Project in hopes of providing all Khmer people access to clean water. 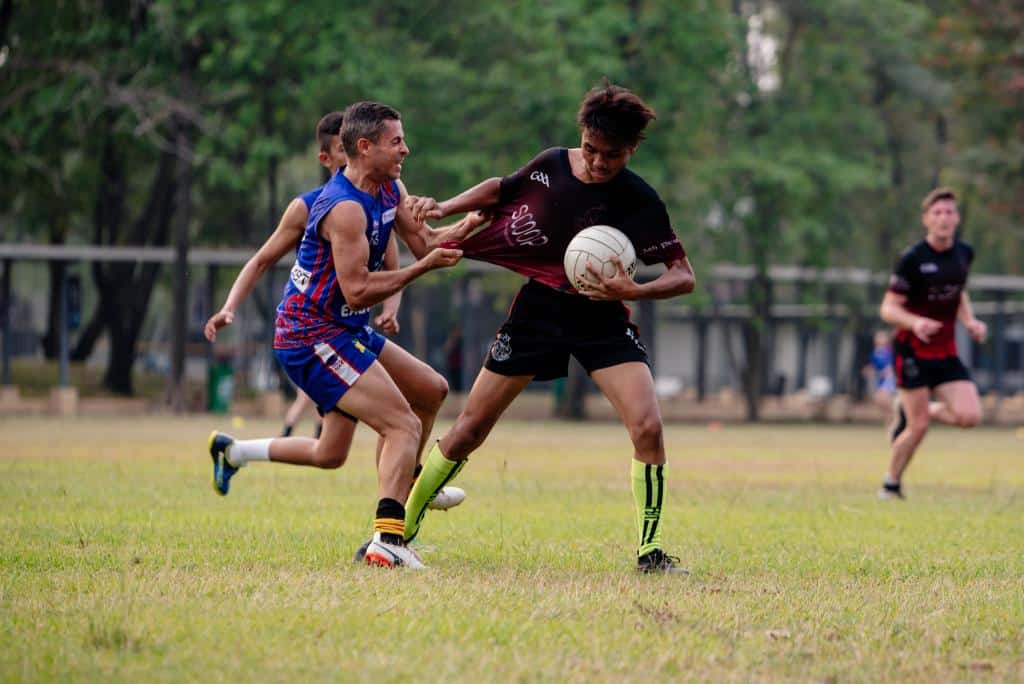 If you are in Phnom Penh on United Nations International Day of Sport for Development and Peace on April 6, be sure to join Riel Phnom Penh Srey at 4 p.m. for a competitive football game against Pour Sourire l’Enfant (PSE). 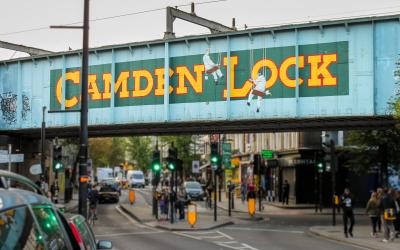 6 Best Neighborhoods in London That You Can’t Miss 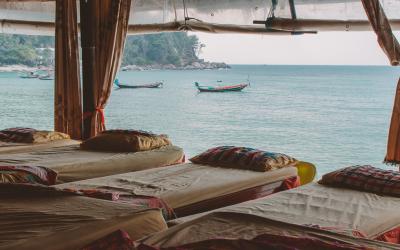 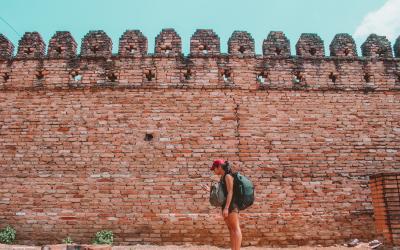 Things to do in Chiang Mai Alone: A Solo Traveler's Guide to the City 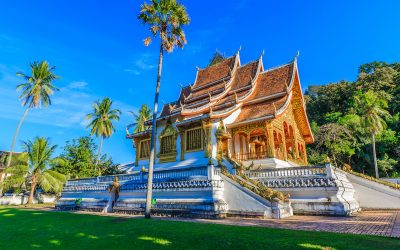 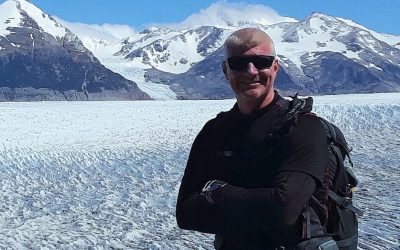 Mad Monkey Appoints Mark Harris to its Advisory Board 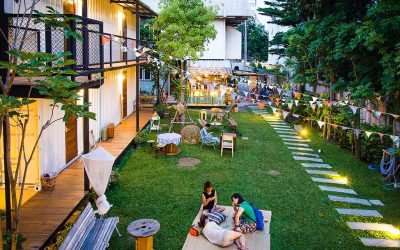